I became interested in photographing the nude around 1973. I was annoyed that most photographs of the nude dealt with the body as fantasy sexual object, or as sanitized light and form devoid of personality. I wanted to see if I could portray the nude as real people in a non-sexual and matter-of-fact way. I also became aware of work by Duane Michaels, John Gossage and Les Krims who were dealing with nudity in a more personal way. My first nude portraits were of friends and acquaintences who wanted to see what it would be like to model nude in a nonthreatening environment. As I became more comfortable working with the nude portrait I began to add props and situations to the photo session. I still work with the general theme of being naked in front of the camera, but from there I try to evoke a multilayered mood or emotion, be it serious, humorous, satirical, sensual, disturbing or a combination of the above. Another aspect of my work that many people find disturbing is the way many of the models confront the viewer with a direct stare. It's as if the viewer were caught looking at a very private moment. The point is that the people I photograph are not ashamed of their nudity and neither should the viewer be. These photographs are a collaboration between myself and the subject, often exploring their own psychological attitudes toward their bodies and the way they see themselves.

View a PDF file of my resume Here. You will need a copy of Adobe Acrobat reader to view the file. 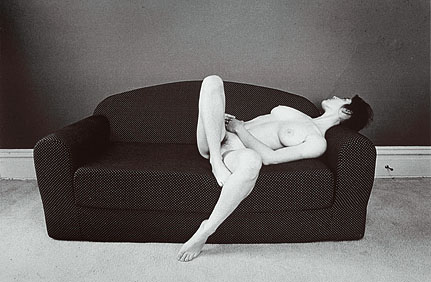